5 Types of Employees to Weed Out of Your Business 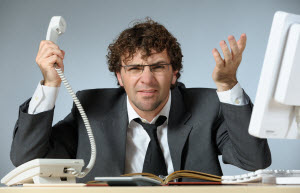 Nobody enjoys the idea of having to fire employees, but sometimes it’s the only way to improve your business’s effectiveness, efficiency and profitability.  But a good manager never lets his or her personal relationships or opinions interfere with the determination of who must go and who can stay.  Instead, HR and managers must assess every employee’s value to the company and their potential for improvement when pruning the workforce.

So what types of employees should you snip away to keep your business healthy?

These are the career employees that offer nothing in the way of life or inspiration to company.  They simply hang on – collecting a paycheck – and barely meeting their job specifications.  They are generally hostile (or at least passive aggressive) and are often a huge drag on employee morale.  They can also infect good or potentially good employees with their negative karma – so kick them to the curb before the bad apples spoils the barrel.

These guys and gals look – on the surface – like excellent employees.  They’re fired up, raring to go and embody all of that “gung-ho” bologna that you read about in management manuals and business magazines.  Unfortunately, they also embody a lot of the disruptive qualities as well.  They’re often resistant to leadership from above, don’t gel well within a group setting, buck established trends (even the productive ones) and have a largely inflated impression of their own worth.

Unfortunately, if left unchecked, this type of attitude has a tendency to rub off on more committed workers.  Be especially vigilant about the role wild card employees may be playing in your company.

These employees bleed the lifeblood right out of any company.  Their antagonistic personalities make effective working relationships impossible and they spend far too much time dwelling on what’s wrong with the company, their job description and the task at hand – rather than actually doing anything to improve it.

Sometimes, these leeches also fall into the deadhead category, but more often than not, they’re the ones who are actively seeking out or creating conflict.  Look for these bad employees around the water cooler – they love to gossip.  They’re also the types that stop talking whenever you walk in the room.

On the plus side, leech employees tend to be the ones who will do anything they can to get into your good graces.  They’re often the folks that volunteer for project leads and step up to the challenge – if they think it will ingratiate themselves with management…  Really, all they’re doing is creating a veil of effectiveness to hide in while they do their dirty work, though – in some cases – you might be able to transform workers with this tendency into productive members of your company.

These employees are rock stars in their own minds.  They think they’re too cool for school and that everything should be handed to them because… well, they’re awesome!  They often resent their jobs, their fellow employees and most of all management.  In general, they think that they should be the ones in charge and, consequently, have a tendency to challenge authority at every step.  You’ll often find these employees repeatedly asking questions in meetings – not because they don’t understand something, but because they’re trying to point out flaws in your thought patterns.

Essentially, these hotshots never grew out of their teenage dreams and just can’t wrap their minds around the fact that somebody else might have something to teach them.  They’re also often the most surprised when it’s time to get the boot!

These employees refuse to let go of the past and are just waiting for their eventual extinction.  These are the types of folks who are always reminding you and others that previous management knew what they were doing and that, “We used to do things this way.”

Dinosaurs can’t seem to break out of the mindset that innovation necessitates change, and that change necessitates innovation.  The old ways aren’t always going to cut it in today’s business environment.  Often, as a result, these dinosaurs become critical of any new implementations you initiate and may actively sabotage them to prove their points.  Chances are these stale employees will never accept the present – which means that it’s time for a changing of the guard.

When weeding dinosaurs out of your company, pay special attention to management-level team members.  While it’s possible to find dinosaurs amongst the ranks of your hourly workers, it’s often employees who have attained a certain level of seniority or responsibility within your organization that become set in their ways.  As bad employees can be found at any level of a company, it’s up to you to gauge each employee’s performance accordingly – whether it’s your newest shift worker or your most senior manager.

Injecting fresh blood into an evolving company is an excellent way to revitalize the workforce.  But so too is pruning away the dead weight.  These five types of employees can bring your company down faster than you’d think possible.  By removing them and grooming the team that’s left, you’re setting yourself and your business up for future success.