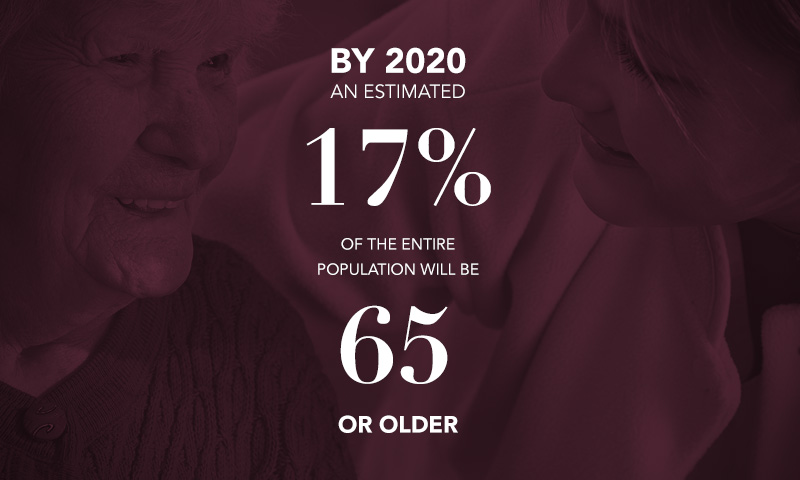 It’s no secret that the home health care industry is booming.  In fact, it’s one of the largest growing trades nationwide, with individual and franchise businesses popping up from coast to coast.  But it’s also one for the most difficult business opportunities to get a handle on.  Partly because of the tremendous growth and partly because of the numerous fundamental changes occurring simultaneously, the home healthcare industry could be classified as particularly volatile.

As a result, it’s expected that many different challenges will rock the industry, though some of these are carry overs from years past.  A few will shape the way the industry grows for at least the next decade. Here are seven of the heaviest hitters:

America is home to an aging population.  By 2020, an estimated 17% of the entire population will be 65 or older.  That’s 50 million men and women who will be increasing their reliance on the healthcare industry as a whole.  Recent AARP survey results show that nearly 90 percent of those over 55 plan to stay in their homes (though roughly 20% will be forced to transfer into nursing homes or assisted living facilities).  But that still leaves up to 70% – 35 million people – aging at home and reliant (at least to some degree) on home health care.  Those figures are staggering.

Given this increase demand, home health care agencies will face the challenge of finding qualified staff.  Unfortunately, current estimates show that demand for capable individuals (which is already far above the supply) will continue to lag behind growth for at least the next five years.

But there is hope.  There are an estimated 1.3 million home health aides currently in the process of entering the job marketplace and 50% growth is expected on top of that figure by 2018.  That makes this job one of the fastest growing fields in America today.

That doesn’t mean that these qualified applicants are distributed evenly, though.  The highest concentrations are – as expected – on the West and East Coast, with a vast gap in between.  The good news is that struggling home health agencies will have more potential applicants to help fill those jobs.  The bad news is that it doesn’t look like all of those open positions will be filled immediately.

Another challenge facing the industry today is the continued (and, to some extent, increasing) battle over classification and certification.  While it might be comforting to think that many of these home health aides are certified nurses or nurse’s aides, the truth is they are all too often “regular” folks who have gone through a non-standardized training program created by the company that hired them.  This leads to plenty of confusion regarding just what these individuals can and can’t do.

Unfortunately, many home health care agencies are being somewhat deceptive in their advertising.  By marketing themselves as home health care solutions, they’re creating the image of a medical professional available in the home.  The reality may be that the only activities the aide actually does are to help a senior with daily life – including such tasks as dressing, meal prep, housekeeping, medication reminders and the like.

Many agencies, on the other hand, do hire nurses or at least have a floating nurse that visits a certain number of clients, a certain number of times each week.  This has led to a push for both government agencies and private organizations to require some sort of standardization and regulation process to classify agencies and their employees – a challenge that agencies in this industry can expect to face in the future.

The home health care industry is in the middle of a tremendous technological revolution.  In fact, figures released by Lucintel predict over $29 billion in growth by 2017.  Older, outdated systems are being replaced with faster, less-intrusive and more powerful equipment.  From home health monitoring systems that integrate with hospital networks to mobile pharmaceutical administrations units and beyond, technology is expanding at an ever-increasing pace…

And the home health care industry is struggling to keep up.  Learning how to correctly and effectively use these new gadgets takes a considerable investment of time and effort.  While some agencies are leading the pack, others are lagging behind – put off by either the added cost of the added hassle.

“Our survey showed a basic disconnect in the payer community between the payers’ desire and their ability to embrace next-generation healthcare business models,” Ray Desrochers, executive vice president at HealthEdge, explained in a press release.

Obamacare will have a significant impact on how home health care agencies get paid in the near future. While some advocates boast that this bill will allow healthcare systems to treat more people at less cost, others say it could destroy the home health care system outright.

One thing is for sure.  While the debate is raging, home health care agencies are caught right in the middle of no man’s land with no place to hide.

But despite challenges in this area, payment is the key component to building a qualified staff for many home health care agencies.  Shocking figures reported in the Lubbock Avalanche-Journal last year show that nearly half of all home care workers live at or below the poverty line.  Many rely on government benefits such as food stamps and make as little as $9.70 per hour.  According to Department of Labor statistics, that’s 4 cents less per hour than fast-food workers.

That cannot be allowed to continue, but many agencies simply cannot afford to pay more.  While technology may be able to pick up some of the load (at the cost of individual jobs), there remains no clear cut answer as to how to build better wages for the backbone of this industry.

With the ongoing debate about who is right and who is wrong in Washington raging, healthcare is a big fat target for political movers and shakers.  The drive to find better, more cost-effective measures for dealing with non-urgent, non-life-threatening illnesses and injuries has led many lawmakers to conclude that home health care is not only the best option – but that it’s the only option.

Indeed, some states – like Ohio – are trying to weed expensive and hard-to-care for patients from hospital settings.  This automatically shifts the cost of treatment from the public purse to a private one.  And while this is contributing to the growth of home care as a whole, it’s also putting added strain on an already-struggling industry.

As in any industry that’s booming, the key to success is adapting on the fly.  There’s no real time to sit down and plot out a ten-year business plan because, by the time all the estimates are in, the environment has changed significantly.  Businesses must go with their best guesses and hope for the best.   Unfortunately, this means that many will fail.  However, it also means that a few will be extremely prosperous.  The vast majority will fall somewhere between these two polar opposites.  Where will your home health care agency be?