The U.S. Department of Labor just announced new regulations that will double the salary threshold for overtime pay from $23,660 to $47,476. The new rule, which takes effect on December 1, 2016, will create overtime pay eligibility for 4.2 million more workers across the United States.

For business owners, the regulations create new challenges that require immediate attention. In order to comply by December, businesses employing both hourly and full-time workers will need to make significant changes in terms of how they manage workers, track time, and pay wages.

Before making any changes to your business, it’s important that you take some time to understand the facts surrounding the new overtime rules. Here’s a quick summary of the most relevant information: 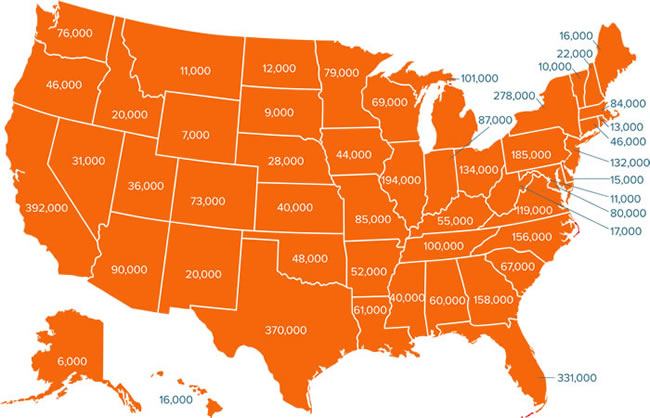 How to Comply: 4 Recommended Options

When it comes to developing a plan for your business that meets the expectation of the new rules set by the Department of Labor, you have a few options: 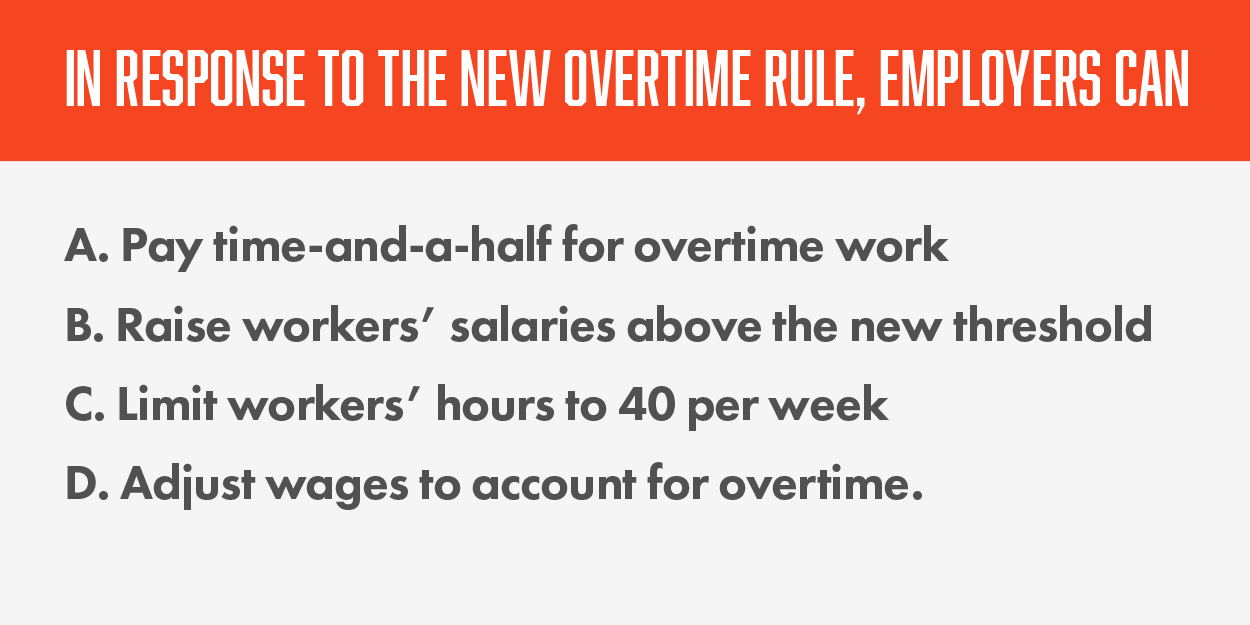 1. You could pay overtime in addition to the employee’s current salary when necessary. If your employees are being paid a salary and they only work overtime on rare, sporadic, or predictable occasions, you could continue to pay your newly-eligible employees the same salary and pay them overtime wages as needed. This option would work best for a business that can predict or plan for occasional spikes throughout the year in which employees tend to work more than usual and in turn can budget accordingly.

Example offered by the DOL: Alexa, a manager at an advertising agency, earns a fixed salary of $41,600 per year ($800 per week) for a 40 hour workweek. Because her salary is for 40 hours per week, Alexa’s regular rate is $20 per hour. If Alexa works 45 hours one particular week, the employer would pay time and one-half (overtime premium) for five hours at a rate of $30 per hour. Thus, for that week, Alexa should be paid $950, consisting of her $800 per week salary and $150 overtime compensation.

3. You could evaluate and realign hours and staff workload. If you want to prevent your employees from working too many overtime shifts, you can use employee scheduling software and time tracking software to monitor schedules and attendance more diligently. This will allow you to realign employee hours when needed, or encourage you to hire more employees to redistribute the workload each week.

Example offered by the DOL: John, a manager for a local hardware store who satisfies the duties test for the executive exemption, currently begins work at 9am Monday— Friday. Under the Final Rule’s new salary level, he would be newly entitled to overtime compensation. Among other duties, John works until the store closes at 7pm. The store may wish to adjust John’s schedule such that he doesn’t need to begin work until 10am, thus limiting the number of overtime hours he works.

4. You could adjust wages to account for overtime. For example, you could adjust earnings to reallocate it between regular wages and overtime so that the total amount paid to the employee remains largely the same.

Example offered by the DOL: Assume a supervisor at a private gym who satisfies the duties test for the executive exemption earns $37,000 per year ($711.54 per week). The supervisor regularly works 45 hours per week. The employer may choose to instead pay the employee an hourly rate of $15 and pay time and one-half for the 5 overtime hours worked each week.

In the example above, new the adjustments would work out like this:

The option you ultimately choose will depend largely on the work habits of your employees, your budget, and the flexibility of your team.

Under the Fair Labor Standards Act (FLSA), employers must consistently keep track of the hours that non-exempt employee hours work in order to ensure they are being paid fairly (i.e. above the minimum wage and for overtime hours).

The FLSA does not specify the tools or require certain methods that employers must use to track employee time—they simply require you to keep accurate records.

If you’d like to start tracking time for your employees now in preparation for the new overtime regulations going into effect in December, the easiest way to do it is by using a time clock and attendance software tool.

Ready to stop manually tracking employee time? Start your free 14-day trial of When I Work Time and Attendance!

When I Work has a lightweight and affordable time clock software tool that can allow you to easily and conveniently keep records of employee hours, track overtime, and forecast labor costs. More than 50,000 business owners rely on When I Work for tracking time, scheduling, and communicating with their employees. With When I Work Time and Attendance, you can:

Still have questions about the new overtime rule? Click here to read through a comprehensive list of FAQs compiled by the DOL.