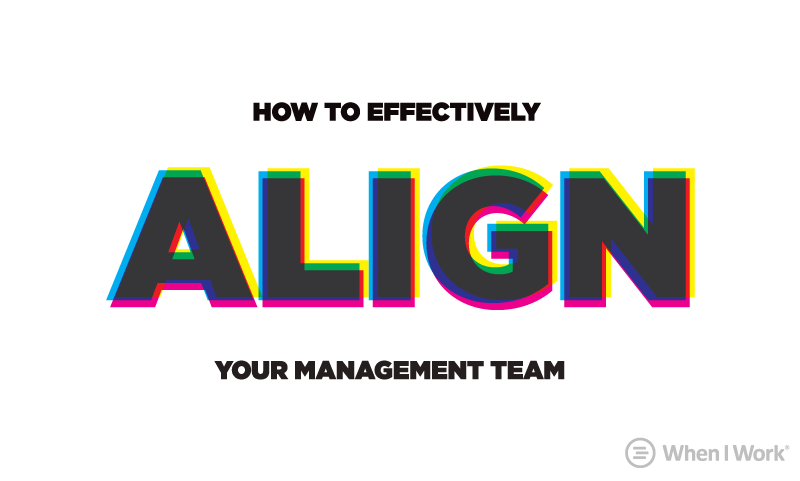 Every business environment will have different cross-functional groups that each have their own individual views, goals and priorities. Getting everyone to work together while playing by the same rules and reaching for the same goals is a challenge.

Each team member will always be at a different professional level, and therefore their functional priorities may vary. The challenge is to translate the collective goals and objectives of the team in order to understand what direction management must go in to enable their team’s success. Then the management team can work backward from their business goals to reach the team’s group and individual performance requirements.

By approaching the team in this manner, you’ll allow for an effectively aligned management team and workforce. This system provides a common touch-point for ongoing planning, decision-making and collaboration among the team members from top to bottom.

The entire team will understand how to anticipate all types of behavioral influences and how to recognize what’s needed to optimize the group’s performance, and each other as a whole, so they can lend influence, support and improvement where needed.

Why Team Alignment Is a Problem for Many Organizations
Without an effectively aligned management team, it’s common for managers to become frustrated by the lack of their team’s effectiveness. Generally, this isn’t because of a lack of the team’s ability or desire, but rather it usually stems from the lack of proper team alignment among the various projects within that organization.

Many organizations have significant gaps in their team members’ understanding of the top priorities of the business and what’s expected from them by management. For example, if the company requires a 10% improvement in productivity but the team doesn’t reach the goal management has set forth, the most common cause is that the team members were not aligned on a common path forward.

This means each individual manager has focused on his or her personal idea of what management was asking of them. A different vision became the focus because the manager was given a goal without being given a clear path as to how to reach the initiatives that were given. Therefore, it’s critical to have an aligned management team as it relates to the success of the company and to reaching the company’s goals.

How to Begin the Team Alignment Process
Assessing the team’s alignment is the first step in developing a well-aligned organization. All systems and structures must support the company’s vision.

Secondly, the entire team must understand how their personal goals relate to the objectives set forth by the management team. Now it’s time to get everyone moving in the same direction.

How to Evaluate the Organization’s Alignment
Sometimes this is easy, and sometimes it’s not. If the team has visible debates and disagreements, it’s easy to see there’s room for improvement. And other times, the team may appear aligned, but many teams remain silent to avoid confrontation and therefore those teams are not truly aligned.

The benefits of having a well-aligned team are significant, and there’s plenty of information about how to go about aligning a team through incentives, team-building and other types of management techniques. However, the first step must always begin with an honest evaluation.

Evaluation Exercises
1. Start with brainstorming possible opportunities. Have your team make a list of the top 10 opportunities as seen from their point of view. Ask them for specific information, and avoid giving ideas that are too broad. For example, don’t give “customer service” as an opportunity, but rather drill down to further specify an issue such as “how to reduce customer wait times.”

Request that they only give potential opportunities and not focus on problems and solutions. For example, don’t give “training” as an answer, but rather give the issue that requires resolution and how it will enhance the training program.

2. It’s important that the team will ultimately be given authority to impact the opportunities that are up for discussion. The team lists should only contain projects that could be completed within a few months and by small teams of one to four or five people.
Assign a group leader to write down each opportunity. The brainstorm list should consist of each idea that would be performed by the team. Now have the team prioritize the list according to what they think are the top three priorities.

How to Evaluate the Alignment Exercises
If the team is perfectly aligned, the top three priorities will all be the same and in the same identical order. Select one team member’s list as a baseline for the comparison.

If the team members are aligned, there’s no need to go any further. However, if the team isn’t aligned, a team alignment program is a viable option. If the team continues without being aligned, it could negatively impact their personal productivity and could create potential conflicts with other team members.

How to Optimize Team Performance for Perfect Team Alignment
1. Clearly define and communicate the organization’s team-supported goals and strategies. Then make sure each team member understands them.

2. Help your team understand that it’s more important to win than it is to be right. Because when everyone works together as a team, that’s when the customers see the organization at its best.

3. Confirm the value of a team. Additionally, confirm that each individual team member is perfectly clear as to their primary role and the responsibilities of that role within the team.

4. Validate the strategy that’s in place and that it’s the one the team will pursue. This is easily done by using a competitive strategy that provides an incentive, such as the opportunity to win something for a specific sales goal, or it could be a growth strategy that will evolve the team member to the next level.

5. Once a team member reaches his or her goal, it’s important to publicly recognize those achievements if the desire is to have that level of performance repeated and exceeded. Additionally, it’s important for other team members to see what happens when they reach their goals and how each member is rewarded for good performance.

6. Add specific checkpoints for the team to regularly report back to the team leader or manager. Set clearly defined communication requirements, and avoid calling too many last-minute meetings, which could come across as disorganized and portray unclear objectives as this will only result in stress and confusion for the team.

7. There may come a time when the team leader or manager isn’t conveying the goals and strategies as clearly or in the manner that the organization would like. Should such situations arise, never undermine the authority or the role of the team leader or manager in front of the rest of the staff. A one-on-one meeting at a later time and away from the rest of the team is the best approach.

Conclusion
Creating team alignment serves many purposes. It helps leverage the strengths of the team as a whole so higher performance goals are kept within reach. It will help give the team a purpose and a shared vision. As well, it helps the team identify and commit to the team’s values, while also creating a cohesiveness among team members that allows them to work as one to create action plans and then put their ideas into action. How’s the team alignment in your organization? If it’s not in alignment, make time to correct the situation now before it begins to wreak havoc on the team members and their goals and the goals of the business as a whole.